THE EXTENSION OF THE CRAFTSMAN’S HAND BY ROBOTICS

The experiment in question focuses on the possibilities that robotics brings to ceramic craft practice. Focusing on these ceramic practices, the question is how and where traditional craft-based knowledge, rooted in the skills and experience of making three-dimensional objects, can inform novel ceramic processes that utilise robotics, and how such a new technological development opens spaces for new expressions and allows a rethinking of traditions within craft practice.

The overall process within the experiment consisted of the following steps:

1. Recording a movement by moving the tool attached to the robot.

2. Applying a curve to the recorded movement, here named a filter.

3. Executing the cut by the robot arm through a lump of clay.

Recording: By manually moving the attached tool on the robot, it is possible to record the robot's movement. The recorded movement is reflected as a curve at the GUI, and it is possible to scale the curve up or down, which will change the range for the execution of the movement by the robot. Furthermore, the recorded movement reflected as the curve consists of a number of recorded points over time. Thus, if the movement is fast, then the distance between the points is longer along the recorded curve. The distance between the points is important since it affects the further process.

Filter: In this experiment, the filter represents a curve that is possible to add to the recorded curve before the final execution of the cut by the robot arm. The added curve is referred to as ‘the filter’ since it adds refined details to the recorded curve without transforming it as such. A curve represents the filter based on the pre-sets of mathematical graph types and functions that can be manipulated. The filter is added and merged in relation to the number of points at the recorded curve and will either be stretched or compressed depending on the number of points. Few points will stretch, and many points will compress, reflected as red dots at the images. Thus, using the filter makes it possible to add sophisticated and refined details that can be integrated with the craftsman’s touch.

Executing: After scaling the recorded curve and adding the filter, the cut by the robot arm with the attached wire tool is executed through a proper lump of clay.

Crafting Ceramics through the Use of Virtual Reality

This project focuses on the possibilities that virtual reality (VR) opens up for ceramic craft practice. Thus, this contribution is about how new technologies create new possibilities within crafting and how it can build on and link traditional techniques. For this purpose, the research explores how VR, by using Oculus Rift and 3D printing in clay, links to the process of crafting within the field of ceramics. Furthermore, the wheel for throwing and the shape of a vessel is chosen as the starting point for exploration and experimentation.

The process in the experiment is based on a two-step process within the 3D virtual sculpting environment Oculus Medium. The first step entails developing a tool for using a virtual wheel. Here named the wheel-tool. The second step is the actual sculpting of the vessel through the use of the wheel.
The wheel-tool is developed by drawing it with a brush in Oculus Medium. This makes it possible to draw a 3D shape that, in this case, becomes the wheel-tool for using the virtual wheel. The workflow with the same wheel-tool can be utilised based on scale, angle and speed, which is reflected in the final object in the form of a dynamic and varied pattern on the surface of the rotated object.

Finally, to make a ceramic product, the digital form is 3D printed in clay. In this case, through the use of a WASP 40100. The transformation from a digital to physical form depends on the 3D printing techniques and resolution. In this case, the print layer is emphasised by a layer height of 2 mm. This makes the clear horizontal lines contrast to the pattern's vertical direction based on the wheel-tool.

The quality of crafting by this technique is based on its ability to combine throwing and making patterns while building up the vessel. In general, these patterns are characterised by vertical ornamental shapes that makes up a relief. These vertical ornamental shapes differ from the pattern of the horizontal lines seen from the 3D clay print technique and the horizontal grooves coming from fingers or tools when throwing in clay.

The primary difference is the process of pattern-throwing by using VR obtained by a one-step process that combines throwing and making ornamental patterns while building up the vessel. This is important since it makes the pattern-making and throwing happen as an integrated process. Pattern and throwing work as a whole, enabling the pattern to serve as the base for the expression.

The research project Filigree Robotics investigates how digital technological developments open spaces for new expressions and allow rethinking of traditions in ceramics. The project is a collaboration between the field of Ceramic Design, School of Design and The Centre for Information Technology and Architecture(CITA), School of Architecture with Martin Tamke, Henrik Leander Evers and Esben Nørgaard Clausen. The project unfolds how advances in 3d motion capture technology, digital scanning technology and 3d printing in clay create new interfaces and processes between human, space and material. Thus Filigree Robotics is situated in a context that allow the combination of specialized knowledge of ceramic material and architecture with digital technology.

The development of design and fabrication is interwoven. The first step is based on hand-modelling of a mold as input to a special developed computational interactive system. The interactive system is here a generative algorithm that works as a pattern generator. The 3D modelling software Rhino and Grasshopper provides the environment for developing the pattern generator. The mold is 3D scanned, depending on the shape of the mold the pattern is digitally unfolded, and a path for 3D printing generated. The adapted 3d printed paths are driving the robotic movement of a clay extruder nozzle with porcelain.

In combination with the control of the robot arms movement, printing of clay cannot only be executed with high precision, but can as well stopped at any moment. Overall, the fine print is able to utilise and emphasise the nature of the porcelain as a plastic material. Spikes are characterized by the plasticity and "life" of clay expressed in the layered built. This allows for novel expressions as the 3d print of spikes, which are later glazed with gold. The final step in the making are several steps in glazing and the firing at 1260 degrees.

A collaboration at The Royal Danish Academy of Fine Arts - The School of Design and Architecture, - between Flemming Tvede Hansen, SuperFormLab and CITA: Centre for Information Technology and Architecture, Martin Tamke og Henrik Leander Evers.

Materiality through digital technology is in this research considered in an extended way, as being the result of firstly the interaction of a designer with responding matter; here clay, - and secondly the process; here interventions by the designer, 3d printing, firing and glazing.

The project used design as a method of inquiry, reflecting on action and through action. Through experiments research question, concept, digital technology and ceramic material have been tested, evaluated and iteratively refined.

Through the experiment a computational interactive system for designing wall like composition made up by modules in ceramics that modulate light has been developed. Material processes form the base of the design technology, which holds process and material knowledge and informs ornamentation steered by the movement of the hands. Crafting and its execution become a unity again. Fulfilling performative and aesthetic purposes, the printed ceramics express the playful and light movements of the hands and simultaneously the presence of materiality.

Voice is a collaboration with media artist Carl Emil Carlsen, Sixth Sensor. By the use of the computer engine, Unity 3D different audio features have been utilized for a parametric setup, and input to several coherent and interrelated geometries forming a whole using simple rules. To extract the audio features from the voice the software Max msp has been utilized. The overall shape consists of two spirals defined by two kinds of geometries. Furthermore the two spirals are connected by cylinders.

SoundShaping is a collaboration with Kristoffer Jensen, associate professor, Department of Architecture, Design and Media Technology (ad:mt), Aalborg University, Esbjerg.SoundShaping focuses on the exploration of a digital interactive system to create ceramics from the human voice. Based on a generic audio feature extraction system, and the principal component analysis to ensure that the pertinent information in the voice is used, a 3D shape is created using simple geometric rules. This shape is output to a 3D printer to make ceramic results. The system demonstrates the close connection between digital technology and craft practice.

A collaboration with the programmer and designer Marcin Ignac. The experiment made use of the programming language Processing and a wii remote as a device to capture 3d motions. By the wii remote the movement of the hand is tracked in a 3d virtual space. The dynamic and generative system is defined by emerging 3d geometries which respond to speed. The size of geometry and the distance between the geometries reflects the speed of the movement of the hand with the wii remote. Furthermore the emerged geometries can either increase or decrease and be affected by the following movements of the hand by being repelled or attracted. The emerged geometries provide a trace of the movement in the interactive dynamic system, which may be captured at any time. The captured movement forms the basis for a 3D physical model produced by the use of Rapid Protyping, which express the captured movement in physical form.

An experiments in the meeting between clay and digital space 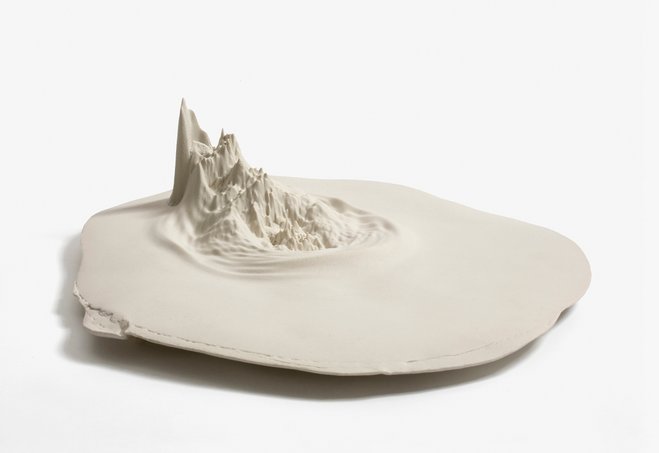